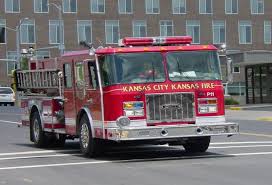 Despite FIA, Fairfax businesses, nearby neighborhood groups and many others opposing, the UG Commission voted to close down the Fairfax Fire station earlier this year so that they could relocate personnel and equipment to a new station being opened in the Piper District. The Fairfax Fire station was closed in July of this year.  Fire Chief Mike Callahan and County Administrator Doug Bach assured FIA that the Quindaro 5 Fire Station and other nearby stations would be able to service our Fairfax businesses and meet the NFPA guidelines including the following:

We agreed that we would quarterly meet and review the response times. At the beginning of October FIA, Chief Callahan, Doug Bach and others met to review the first partial quarter response times since the Fairfax Fire station was closed 7/23/20 thru 9/30/20.

During this partial quarter there were 38 Total Calls to Fairfax:

These are alarming numbers. Fairfax has over 10,000 employees daily in its district.  Many of whom are doing heavy industrial work which means there is a higher risk of accidents. We also store highly hazardous and explosive materials.

FIA is also concerned after realizing during this process that there is also not a Haz-Mat unit located within the radius required since Fairfax does have such high volatility.

We were assured by Chief Callahan in our October meeting that there were administrative issues that have been corrected and that the 4th quarter response times will meet the NFPA guidelines.

FIA will communicate these numbers with our district once we have this meeting in the beginning of January, 2021.

There are no upcoming events.